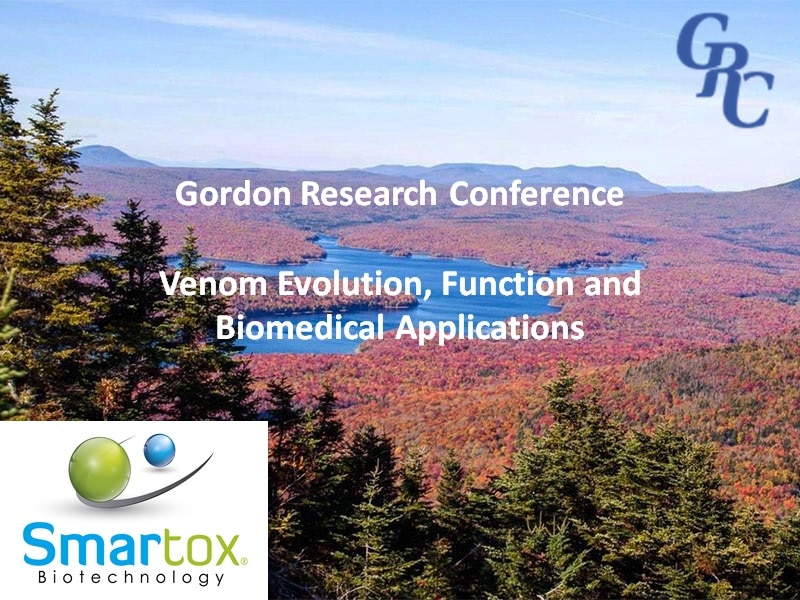 Smartox Biotechnology is pleased to support the 2018 Animal Venom Conference GRC. Aude-Marie will attend the conference and look forward to meeting colleagues.

Venomous animals have a storied history as agents of mystery and danger. Animal venoms are among the most complex biochemical natural secretions known and comprise a mixture of bioactive compounds often referred to as toxins. Despite their complexity, there is significant similarity throughout the animal kingdom in the basic molecular structure and targets of toxins, which include most major physiological pathways and tissues accessible by blood. These features make venom an extremely successful evolutionary innovation whose components are ideal candidates for discovery and development of drugs that act as anti-tumor agents, heart stimulants, therapies for neurological diseases including chronic pain, and many other diseases.

Venom research is at a significant crossroads. Discipline-specific studies have shown the potential of venom as a model for studying molecular diversity, and have highlighted the potential of compounds within venom as therapeutics, while at the same time novel genomic and proteomic technologies have made studies of diverse animals far more tractable. This GRC aims to coalesce and then support a community of experts working on elements of venom biology with the goal of consolidating and expanding the conceptual, technological, and applied opportunities within the study of venom biology.

Venom research has expanded significantly within the last decade, as evidenced by the global increase in venom publications, symposia, and biotech startup companies. The field is poised for major breakthroughs, and gatherings in a research-intensive, collaborative, and engaging setting, as provided by Gordon Conferences, will foster innovative ideas and new cross-disciplinary collaborations to advance the venom field. The overarching outcome for the proposed Venom GRC is to understand what drives venom evolution in nature and how this information can be used to understand cellular processes at a basic and applied level of scientific inquiry.